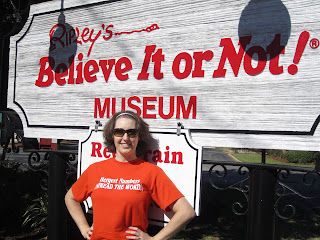 That same day, we left for home but only got as far as Charlotte, NC before a canceled flight extended our trip for a day. Since I was out of clean clothes, I broke out one of the Hergert Numbers t-shirts that I brought to the conference to sell. So, from now on I'm definitely bringing a spare Hergert Numbers shirt with me when I travel!
Posted by Rodger Hergert at 7:45 PM