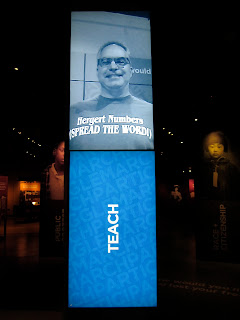 Later on, we ventured down Michigan Avenue to take in the sights and sounds of absurdly high-priced merchandise. One of the best places to find such merch is Crate & Barrel. While meandering about the store, a clerk came up and asked about my shirt. I gave him the 30-second layman's version of the story and he seemed satisfied. Apparently, he couldn't think of anything "mathy" to say, so he told me about a customer he once had named Jessica Neptune who had recently completed her doctorate in history at the University of Chicago. He actually remembered what her research was about, so I'm really hoping he'll remember something about Hergert Numbers to share the next time someone with a math shirt comes into his store. That's what spreading the word is all about!
Posted by Rodger Hergert at 3:24 PM No comments: