OK, Hergert Numbers are not quite in orbit ... yet. But the next best thing is to be sighted at the U.S. Space & Rocket Center in Huntsville, Alabama which is where we find Terra Stamps of Prairie State College sporting her Hergert Numbers shirt. And since the U.S. doesn't appear to be on the verge of sending much back into space anytime soon, we may have to get the Hergert Numbers trend over to Russia in order to leave the atmosphere. Until then, I think this is pretty cool.

Don't forget that you can now keep up with the latest Hergert Numbers news on either Facebook or Twitter (or both!). Keep those pictures coming!

Posted by Rodger Hergert at 5:04 PM No comments:

Have youself a Hergert Numbers Christmas! 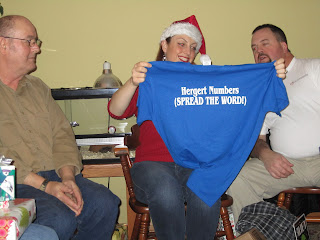 Obviously, Becca stayed off Santa's "naughty list" since her request for a Hergert Numbers shirt for Christmas was honored. I'm sure she'll be wearing it proudly throughout the new year. So, look for her to appear in a future blog post, Facebook message or Tweet.

That's right - Hergert Numbers are now on Twitter! You can keep up with the most up-to-date Hergert Numbers news by following us at @HergertNumbers.
Posted by Rodger Hergert at 8:58 AM No comments: