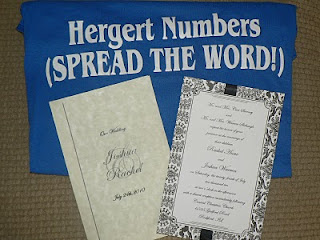 Today, I had the honor of attending the wedding of Rachel Swaney and Josh Slabaugh. They were among the very first people on Earth to own Hergert Numbers t-shirts as they were in the Calculus class in Spring 2009 that kicked off the "Spread the Word" campaign.

As it turns out, Rachel & Josh were merely casual acquaintances until they were in that class together and sat next to each other. One thing led to another and, as they say, it was a match made in Calculus. She was clearly the derivative of his integral. Hopefully, by the time they start a family they will be able to adorn their offspring in Hergert Numbers onesies and bibs.

Congratulations to Rachel & Josh and I wish you a long and happy life together taking pictures of each other in your Hergert Numbers t-shirts.
Posted by Rodger Hergert at 8:25 PM No comments: 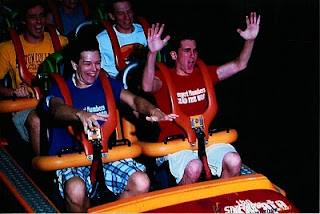 It took awhile to get a copy of this picture, but this was worth the wait. This is Carson and Rob riding the Kingda Ka at Six Flags Great Adventure in Jackson, New Jersey back on May 17th. This is the tallest and fastest roller coaster in the world at 456 feet high and 128 miles per hour. They were fortunate enough to be in the first car on the first run of the day.

You'll also see them in the slideshow with a girl they met at the park that day who was asking about their shirts. Who knew Hergert Numbers could help you pick up girls, too?
Posted by Rodger Hergert at 5:43 PM No comments: 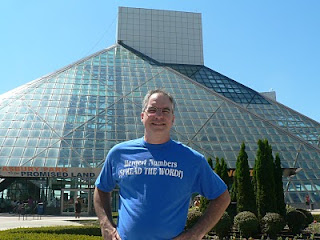 The Hergert Family is in the midst of the 2010 Hall of Fame Tour. We stopped at the College Football Hall of Fame yesterday and will hit the Pro Football Hall of Fame tomorrow. But I couldn't resist spreading the word at the Rock and Roll Hall of Fame in Cleveland today. They don't allow cameras inside this one, but I got this shot before we entered. We snapped a few other photos here that I'll add to the slideshow, so be sure to check those out.
Posted by Rodger Hergert at 9:33 PM No comments: