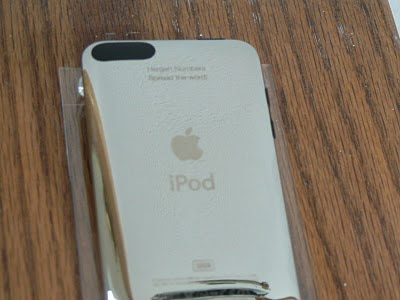 It's really hard to take a decent picture of such a shiny surface, but if you look closely at the engraving you'll see the world's first Hergert Numbers iPod. Apple came out with a deal last week for college teachers or students where you could get a $200 rebate if you bought an iPod Touch and a computer at the same time. The idea is that the rebate is equal to the cost of the cheapest iPod Touch, so that would be free. I chose to go for a slightly bigger one, but it's still a great deal and I was going to get a new laptop this summer anyway.

Stay tuned - there's an even better Hergert Numbers item coming at the end of next week.
Posted by Rodger Hergert at 11:40 AM