A Tradition Unlike Any Other: Hergert Numbers at The Masters 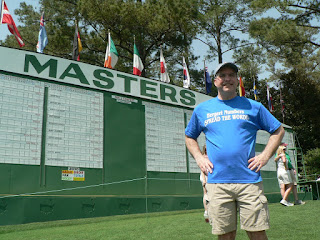 This week, I had the rare opportunity to go inside the gates at the most exclusive golf tournament in the world - The Masters at Augusta National Golf Club. I couldn't help but take advantage of this opportunity by spreading the word by wearing my Hergert Numbers t-shirt. Calculus is obviously a huge part of golf as the players try to maximize their driving distance and minimize their score, so it seemed only natural to bring awareness of the Hergert Numbers to the greatest golfers in the world.

I had a bit of a challenge getting to Augusta as my plane out of Chicago was struck by lightning on takeoff and an 8-inch crescent shaped piece of the wing went missing. After about 30 minutes of contemplation, the pilots decided to head back to Chicago (and the thunderstorms) to get a new plane. After a couple hours of delays, we were airborne again and made it to Columbia, South Carolina in time for a couple hours of sleep before venturing off to the tournament.

Since sponsorship is such a large part of being a professional golfer, I think my next goal is to arrange for a tour pro to be sponsored by the Hergert Numbers. I think the definition would look great on a golf bag!
Posted by Rodger Hergert at 6:28 PM