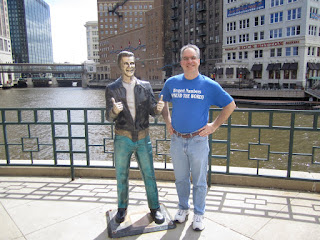 Well, that's the latest Hergert Numbers t-shirt sighting. Keep those photos coming and spread the word!
Posted by Rodger Hergert at 11:48 AM No comments: 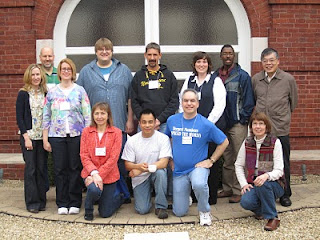 The Hergert Numbers movement took a great leap forward at the 2011 IMACC Conference at the Allerton Park Conference Center in Monticello, IL this past weekend. As you can see in the photo above, 12 of the 118 attendees were from Rock Valley College - the largest group from any single institution. On Friday, I proudly displayed my t-shirt all day and night and into the next morning handing out the HN business cards as fast as possible.

I heard from at least 5 different teachers that they had been using the term when teaching Calculus over the past year. These were faculty from colleges such as Prairie State College, College of DuPage, Southwestern Illinois College, and Elgin Community College. The word is spreading!

On Saturday, I gave my talk titled "What's in a Name?" where I discussed the origin of several different names for mathematical theorems focusing on those that had interesting stories or unusual names. Of course, I threw in the Hergert Numbers a the end for good measure. Among the audience for this presentation was the president-elect of the American Mathematical Association of Two-Year Colleges (AMATYC), so I'm hoping that he'll help us go nationwide. Paul McCombs helped out by wearing his HN t-shirt all day Saturday, including at my talk.

The IMACC Scholarship Fund holds a raffle each year to raise money for scholarships for IL community college students looking to major in mathematics or math education. I donated a t-shirt to the raffle, so it was prominently displayed on the registration table throughout the conference. And if its prominence was compromised, I periodically repositioned it to remain in plain view at all times. The winner of the t-shirt was Terra Stamps of Prairie State College and I'm sure we'll see her showing up in a picture here sooner or later.

In addition, to be sure Hergert Numbers got maximum exposure during the raffle, several people took turns wearing the Hergert Numbers baseball hat as they went up to claim their raffle prize. I believe the hat won at least 8 times during the 15-minute prize giveaway.

Now we need to keep the momentum from the conference going as the school year comes to a close. You can also keep up with the Hergert Numbers by "liking" them on Facebook, so do it today so you don't miss an exciting moment as the word spreads far and wide!
Posted by Rodger Hergert at 3:34 PM No comments: